1. Which characteristic of the network layer in the OSI model allows carrying packets for multiple types of communications among many hosts?

the de-encapsulation of headers from lower layers

the selection of paths for and direct packets toward the destination

2. What are two characteristics of IP? (Choose two.)

does not require a dedicated end-to-end connection*

operates independently of the network media*

Explanation:
The Internet Protocol (IP) is a connectionless, best effort protocol. This means that IP requires no end-to-end connection nor does it guarantee delivery of packets. IP is also media independent, which means it operates independently of the network media carrying the packets.

3. When a connectionless protocol is in use at a lower layer of the OSI model, how is missing data detected and retransmitted if necessary?

Upper-layer connection-oriented protocols keep track of the data received and can request retransmission from the upper-level protocols on the sending host.*

The best-effort delivery process guarantees that all packets that are sent are received.

Explanation:
When connectionless protocols are in use at a lower layer of the OSI model, upper-level protocols may need to work together on the sending and receiving hosts to account for and retransmit lost data. In some cases, this is not necessary, because for some applications a certain amount of data loss is tolerable.

4. Which field in the IPv4 header is used to prevent a packet from traversing a network endlessly?

Explanation:
The value of the Time-to-Live (TTL) field in the IPv4 header is used to limit the lifetime of a packet. The sending host sets the initial TTL value; which is decreased by one each time the packet is processed by a router. If the TTL field decrements to zero, the router discards the packet and sends an Internet Control Message Protocol (ICMP) Time Exceeded message to the source IP address. The Differentiated Services (DS) field is used to determine the priority of each packet. Sequence Number and Acknowledgment Number are two fields in the TCP header.

5. What IPv4 header field identifies the upper layer protocol carried in the packet?

6. What is one advantage that the IPv6 simplified header offers over IPv4?

Explanation:
The IPv6 simplified header offers several advantages over IPv4:
· Better routing efficiency and efficient packet handling for performance and forwarding-rate scalability
· No requirement for processing checksums
· Simplified and more efficient extension header mechanisms (as opposed to the IPv4 Options field)
· A Flow Label field for per-flow processing with no need to open the transport inner packet to identify the various traffic flows 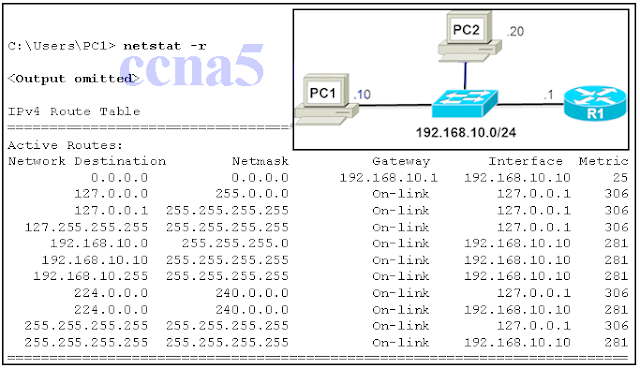 Which route from the PC1 routing table will be used to reach PC2?

R1 receives a packet destined for the IP address 192.168.2.10. Out which interface will R1 forward the packet?

Explanation:
If a route in the routing table points to a next hop address, the router will perform a second lookup to determine out which interface the next hop is located.

9. What type of route is indicated by the code C in an IPv4 routing table on a Cisco router?

dynamic route that is learned through EIGRP

Explanation:
Some of the IPv4 routing table codes include the following:

10. What routing table entry has a next hop address associated with a destination network?

Explanation:
Routing table entries for remote routes will have a next hop IP address. The next hop IP address is the address of the router interface of the next device to be used to reach the destination network. Directly-connected and local routes have no next hop, because they do not require going through another router to be reached.

11. Which statement describes a hardware feature of a Cisco 1941 router that has the default hardware configuration?

It does not have an AUX port.

It has two types of ports that can be used to access the console.*

It does not require a CPU because it relies on Compact Flash to run the IOS.

Explanation:
The connections in a Cisco 1941 router include two types of ports that are used for initial configuration and command-line interface management access. The two ports are the regular RJ-45 port and a new USB Type-B (mini-B USB) connector. In addition, the router has an AUX port for remote management access, and two Gigabit Ethernet interfaces for LAN access. Compact Flash can be used increase device storage, but it does not perform the functions of the CPU, which is required for operation of the device.

12. Following default settings, what is the next step in the router boot sequence after the IOS loads from flash?

Locate and load the startup-config file from NVRAM.*

Load the bootstrap program from ROM.

Load the running-config file from RAM.

Explanation:
There are three major steps to the router boot sequence:

13. What are two types of router interfaces? (Choose two.)

14. Which two pieces of information are in the RAM of a Cisco router during normal operation? (Choose two.)

15. A router boots and enters setup mode. What is the reason for this?

The IOS image is corrupt.

The configuration file is missing from NVRAM.*

16. What is the purpose of the startup configuration file on a Cisco router?

to provide a limited backup version of the IOS, in case the router cannot load the full featured IOS

17. Which three commands are used to set up secure access to a router through a connection to the console interface? (Choose three.)

Explanation:
The three commands needed to password protect the console port are as follows:
line console 0
password cisco
login
The interface fastethernet 0/0 command is commonly used to access the configuration mode used to apply specific parameters such as the IP address to the Fa0/0 port. The line vty 0 4 command is used to access the configuration mode for Telnet. The 0 and 4 parameters specify ports 0 through 4, or a maximum of five simultaneous Telnet connections. The enable secret command is used to apply a password used on the router to access the privileged mode.

18. Which characteristic describes an IPv6 enhancement over IPv4?

IPv6 addresses are based on 128-bit flat addressing as opposed to IPv4 which is based on 32-bit hierarchical addressing.

The IPv6 header is simpler than the IPv4 header is, which improves packet handling.*

Explanation:
IPv6 addresses are based on 128-bit hierarchical addressing, and the IPv6 header has been simplified with fewer fields, improving packet handling. IPv6 natively supports authentication and privacy capabilities as opposed to IPv4 that needs additional features to support those. The IPv6 address space is many times bigger than IPv4 address space.

19. Open the PT Activity. The enable password on all devices is cisco.
Perform the tasks in the activity instructions and then answer the question.

For what reason is the failure occurring?

SW1 does not have a default gateway configured.*

The IP address of SW1 is configured in a wrong subnet.